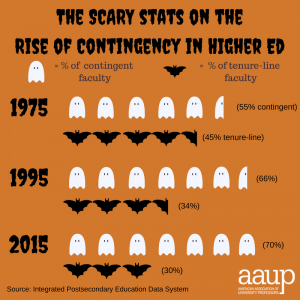 Talk by Nancy MacLean, the William Chafe Professor of History and Public Policy at Duke University, “The Origins of Today’s Radical Right and the Crisis of Our Democracy,” November 9, 2017, 5:30-6:30, Kulynych Auditorium, Byrum Welcome Center.

What is the AAUP Redbook?
The AAUP’s Policy Documents and Reports (widely known as the “Redbook” because of the color of its cover) presents in convenient format a wide range of policies. The current edition (2014), the eleventh, includes basic statements on academic freedom, tenure, and due process; academic governance; professional ethics; research and teaching; online and distance education; intellectual property; discrimination; collective bargaining; accreditation; and students’ rights and freedoms. Among the eighteen new reports included in this edition are statements on academic freedom and outside speakers, campus sexual assault, the inclusion of faculty on contingent appointments in academic governance, and salary-setting practices that unfairly disadvantage women faculty. An introductory essay discusses how to incorporate AAUP principles into faculty handbooks. (Reprinted from https://www.aaup.org/reports-publications/publications/redbook).

What is a Faculty Handbook?
Courts are often asked to decide whether a faculty handbook—which can include policies, rules, and procedures under which professors work—also establishes a contractual relationship between a professor and an institution. The issue usually arises in the context of a breach-of-contract claim, and the question is whether the faculty handbook is part of the employment contract between the professor and the institution. Contract claims are primarily based on state law and the law affecting the claims varies greatly from state to state. A majority of states have held that contractual terms can at times be implied from communications such as oral assurances, pre-employment statements, or handbooks. Of these, faculty handbooks are the most common source of implied contract terms. (Reprinted from https://www.aaup.org/our-programs/legal-program/faculty-handbooks-guide).

Join the National AAUP:
The national office has a history of assisting the WFU-AAUP, especially on matters of tenure and promotion. Please support the work of the AAUP by joining now at:
https://www.aaup.org/membership/join