Our mission is to promote and uphold AAUP principles on faculty rights and responsibilities, particularly the principles of shared governance and academic freedom.

We are committed to assisting pre-tenure, untenured and non-permanent faculty with problems or questions you may encounter related to your appointment.

Towards Fair Salaries for All Faculty

WFU AAUP is following up on the motions passed in the College Faculty and Senate last year to raise faculty salaries at all ranks, but especially among the ranks of Associate, Assistant and Teaching Professors.

Faculty Members at WFU largely perceive that they are being underpaid, and the data bear that out.

According to the data in WFU Salary Growth Relative to Tuition Increases, a table available at wfuaaup.org, from 2002-2018 the cumulative percentage difference between increases in the faculty salary pool and increases in undergraduate tuition and fees is 23.3%. If salary increases had tracked tuition increases, salaries would be 23.3% higher than they are now.

Join WFU AAUP in seeking a commitment from the administration to raise the salary pool significantly and allocate it equitably among the faculty.  There is strength in numbers.

The WFU AAUP sent the survey to 556 faculty teaching in any fulltime capacity in Wake Forest College.  The survey was open to responses from December 5 to December 13, 2018. Of the 556 faculty members polled, 392 responded.[1]

The high response rate reveals that the faculty feels strongly about these issues. Members largely perceive that they are being underpaid, and the data bear that out. The survey also reveals that student debt is a considerable burden for many faculty members, especially among the lowest salary ranks, assistant professors and assistant and associate teaching professors. In addition, the survey indicates that two out of three respondents teach Summer School out of economic need.

Of the 201 usable responses on student debt, 129 reported carrying debt and 72 reported no debt. Of those reporting debt when they started at Wake Forest, the average debt load was:

[1] The survey has a margin for error of +/- 3 percentage points at the 95% confidence level.  The margin for error score is very good for the validity of this survey; we can be confident at the 95% level that when we say, for example, that just 20% of faculty are satisfied with their salary increases over the last five years, that 20% score means that for all faculty somewhere between just 17% or 23% are satisfied.  In other words, somewhere from 77% to 83% of college faculty are not satisfied.

[2] It should be noted that the fate of this program, signed into law by the Bush administration in 2007, is currently in question. Under the Trump administration, less than 1% of the first applications for debt cancellation (after ten years of repayment) have been accepted. See “Why are people being denied public service loan forgiveness?,” The Washington Post, 12.21.2018. 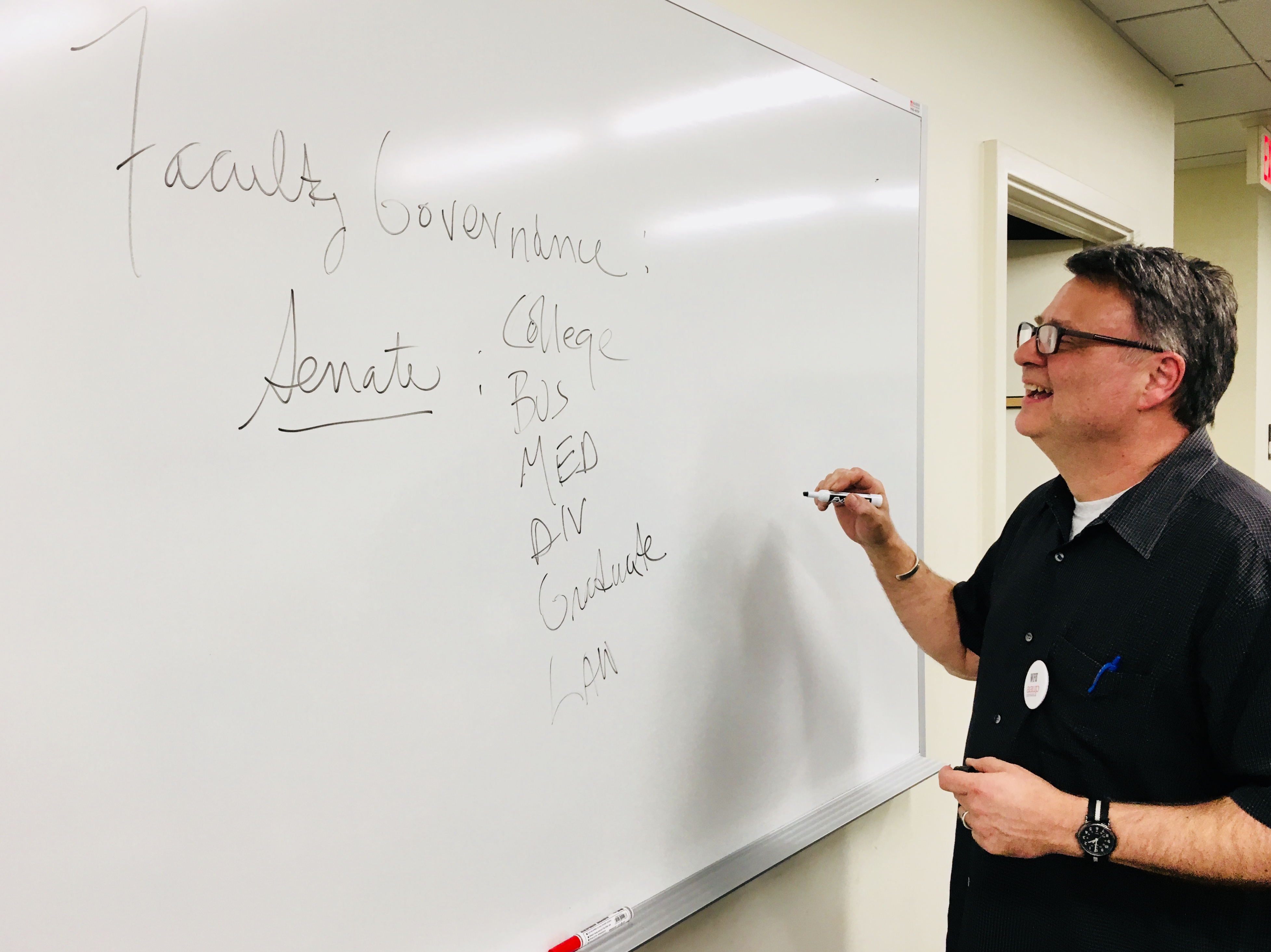 Welcome to the website of the Wake Forest Chapter of the American Association of University Professors (WFU AAUP), a place to find information and perspectives on the rights and responsibilities of faculty and news about the status of the profession, among other things.

WFU AAUP embraces the mission of the national American Association of University Professors (AAUP) which advances academic freedom and shared governance; defines fundamental professional values and standards for higher education; promotes the economic security of faculty, academic professionals, graduate students, post‐doctoral fellows, and all those engaged in teaching and research in higher education, helps the higher-education community organize to make our goals a reality; advocates for higher education’s contribution to the common good.

WFU AAUP’s particular goals this year are: to follow up on the motions passed in the College Faculty and Senate last year to raise faculty salaries at all ranks, but especially among the ranks of Associate, Assistant and Teaching Professors; to provide information about processes of contract renewal, tenure and promotion; and to publicize the AAUP’s guidelines and principles concerning shared faculty governance.

There is plenty to do and your participation is crucial. Please bring your concerns to the meetings or send them to aaup.wfu@gmail.com.
Steve Boyd, WFU AAUP President; Easley Professor for the Study of Religion.

Join the national organization through their website by clicking the button below.